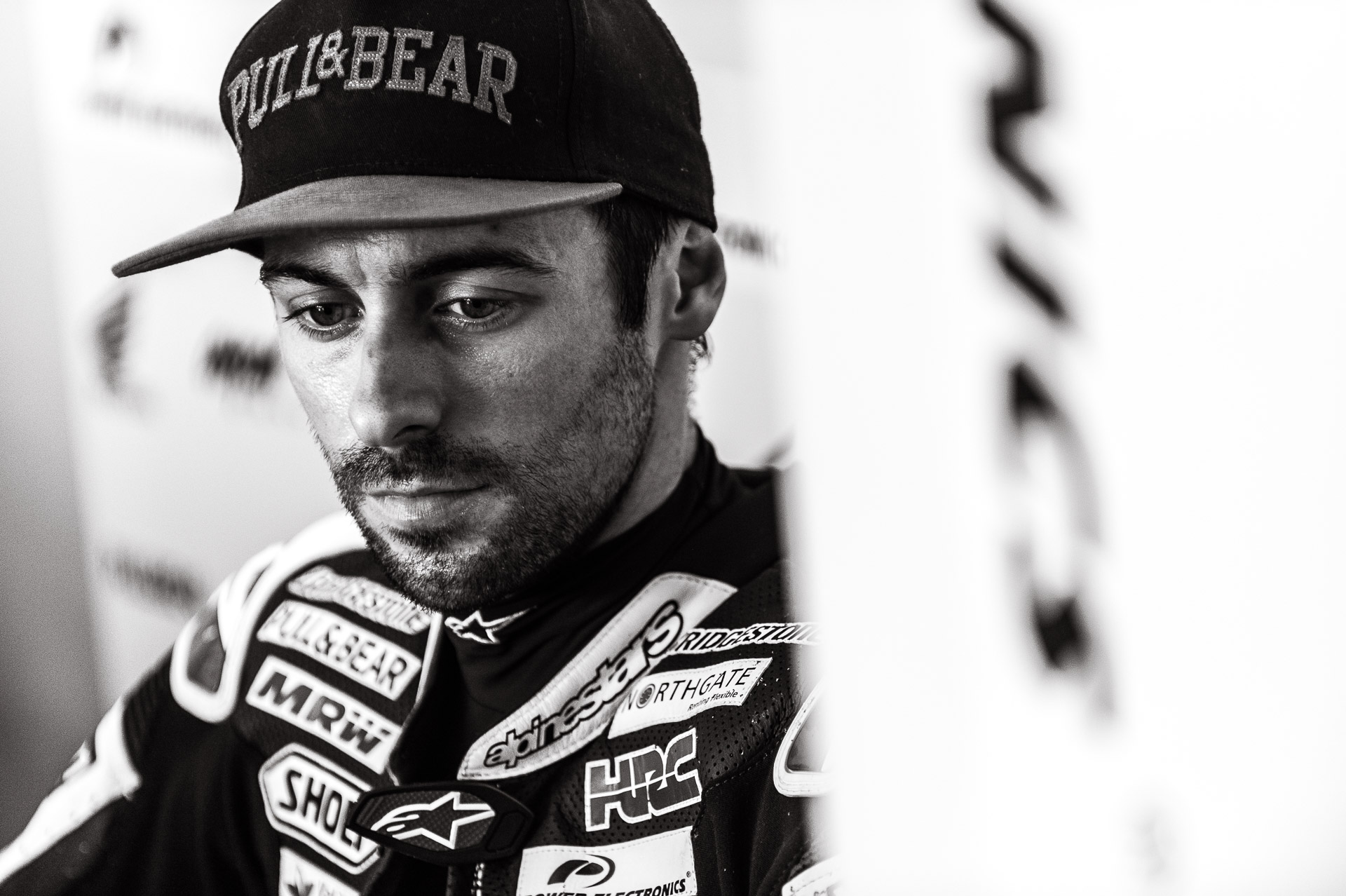 Shortly after qualifying for the 2015 German Grand Prix at Sachsenring, I sat down with Aspar MotoGP Team rider, and class rookie Eugene Laverty, to get some insight into how a MotoGP rider prepares for a race.  On race day I also had the opportunity to photograph Eugene as he went through his pre-race routine.

TG - Can you talk me through your routine from the end of Sunday morning warm-up through to the start of the race?

EL - I come into the pit box after warm up when the session finishes at 10 o’clock and debrief with the guys for 30 to 40 minutes.  Afterwards, I’ll get changed out of my leathers in the race truck and do a little bit of stretching.

It’s nice now because in the past in Superbike I was never able to watch the Supersport race as we were always too busy with the 2 races.  Now I have a good chance to watch the Moto3 and Moto2 races so I can actually stay quite relaxed.

Moto3 starts at 11 o’clock and I’ll watch it on TV so I can see the starting lights and the first few corners.  I know some riders go to the grid but I don’t see any reason as they always show the lights on TV.

After the Moto3 race, I go back to the motorhome to eat lunch and watch the Moto2 race.  As soon as the chequered flag comes out from that race I start to get ready in the race truck which is usually around 1 o’clock.  I’ll warm up, then stretch for around 20 mins.  I’ll get into my race suit around 1.25 and go to the box around 10 minutes before we go to the grid.

It’s a really relaxed schedule and I always prepare my spare helmet, visor, gloves, knee sliders etc on Saturday evening so I don’t have to stress about those things on race day.

TG - Do you normally eat the same thing before each race?

EL - Yes.  I like to have some pasta and some chicken.  I don’t have a sensitive stomach so I can have a little bit of tomato sauce and maybe an espresso afterwards.

The key thing always for me is hydration, I’ll take on some electrolytes to make sure my levels are correct and ready for the race.  I try not to drink so much that when you arrive on the grid you have to go to the toilet again.

TG - Do you have superstitions?  I’ve heard some riders have lucky underpants or lucky socks. John McGuinness drops a penny down his leather.  Do you do anything like that?

EL - I refuse to have superstitions even when things happen on repeat.  I just refuse to believe it, it’s bull**** isn’t it?  There’s nothing to it.

TG - Once you get onto the grid do you have a specific routine that you follow in the way that Valentino Rossi does?

EL - No for me I prefer to speak with the crew around me about relaxed things, not even about racing.  I think through everything the evening before and maybe after warm up and come up with my plan for where I’m going through turn 1.

I think if you begin to think about it then that’s too late and you’ll put pressure on yourself.  I prefer the plan to be already in my mind so I can stay relaxed when I go to the grid and then there’s no real feeling of pressure.

TG - Is it particularly important for you to have Pippa (Eugene’s fiancée) and John (his older brother and ex British Superbike privateer champion) with you?

EL - It is.  You’ve got your own little team around you and it is important as the paddocks may change but it doesn’t feel too different.  We’ve got the same motorhome, Pippa’s there and my mechanic Phil who’s been with me for a long time.

Whenever I came to visit Michael (Eugene’s other racing brother) racing in MotoGP I would notice how different the MotoGP paddock was as you’d pick up on everything and I thought it would take some getting used to but when you’re here racing you don’t notice it.

TG - Talking about Michael.  Are you looking forward to racing with him tomorrow?

EL - Yes.  Unfortunately, we haven’t had a good weekend, either of us, for strange reasons.  We’ve got a big issue with our tyre pressure, a real amateur problem.

Michael has had a broken engine and all sorts of technical problems so we’re not where we want to be.  We’re around 23rd, and I think we’re both a lot better than that and deserve to be further up the order.

TG - Have you raced against each other before?

EL - Yes, in 2009 we did in World Supersport.  Michael did around 5 rounds as wild cards and I was riding with Honda battling with Cal (Crutchlow) for the Championship.   It’s nice to be racing again together; we’re just not having a good weekend so far.

TG - One last question I wanted to ask.  As a photographer, I’ve stopped using a flash on the grid and in pit lane.  Does the use of flashes irritate you or are you able to zone out from it?

EL - Even if it’s not sunny I prefer to wear sunglasses on the grid because of the flash as it can give you white spots and stun you a little.  Wearing sunglasses can help.  I’ve experienced problems with flashes a few times out on track coming from the service road, maybe at a test, which is really not good as it can stun you.

TG - Thank you very much for your time and best of luck for tomorrow.

During Sunday’s race, Eugene wore a special helmet to pay tribute to his friend, Dr John Hinds, who died at the recent Skerries 100 Road Races in Ireland. The helmet, made by Shoei Helmets, was a replica of Dr Hinds helmet.

Dr Hinds was a travelling doctor at road races in Ireland and earned his nickname as ‘The Flying Doctor’ by saving countless lives in both the racing and medical communities. He also worked as a fervent campaigner for a Helicopter Medical Support unit in Northern Ireland to offer a quick response to serious accidents within the country.

A petition was started following the accident to continue Dr Hinds campaign for HEMS NI and over 45,000 people have signed to date. If you would like to add your name to the petition you can do so here.

Eugene with his Shoei tribute helmet to Dr John Hinds.

Eugene leaves his pit box to start the warm-up session.

Returning to the pit box at the end of warm-up to his mechanic and long time friend Phil Maron.

Debriefing with his crew after the morning warm-up.

Lunch time and a chance to watch the Moto2 race.

Preperation begins for the race. It was painful just watching him go through his stretching routine.

Eugene injured his left shoulder in a crash at Catalunya and was paying particular attention to that area during his stretching routine.

And more work on the injured left shoulder.

Stretching done, gear on and time to head to the pit box for final preperations before taking to the grid.

Eugene on the grid with his brothers Michael and John. Michael had replaced Marco Melandri for the weekend. A reward for his work as Aprlia’s test rider.

Eugene leads his brother Michael and a group of riders including his team mate Nicky Hayden into turn one.