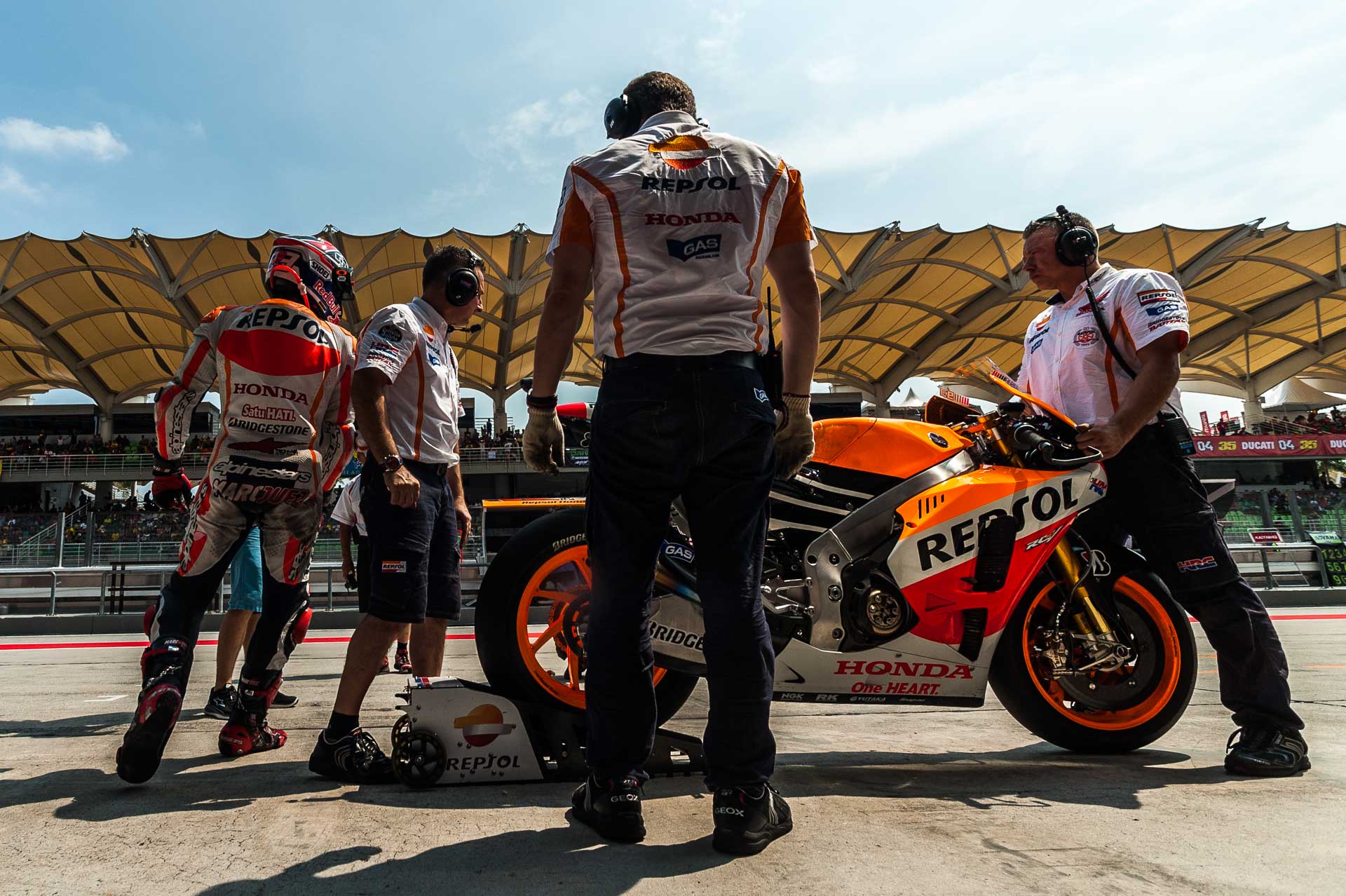 From the cool of Melbourne, it was on to the heat and humidity of Malaysia, for the Malaysian Grand Prix at the Sepang Circuit. Clare and I arrived in Malaysia on Tuesday evening. For our first two nights, we had decided to stay in downtown Kuala Lumpur and picked a hotel close to the Petronas Towers to give us easy access to the rest of the city. We had treated ourselves to a room with a Twin Towers view and what a view it was. I think you would struggle to find a better view of the towers anywhere in the city.

After spending Wednesday exploring Kuala Lumpur, we met up with my friends Stephen and Trev who arrived from Melbourne. Trev and Clare stayed in the city for a bit more sightseeing and Stephen and I headed to track to collect our credentials. I’d not found the heat of downtown Kuala Lumpur to bad, it was hot but I was coping okay. The area of the track was a whole different ball game.

We were dropped at the accreditation centre, which thankfully was next to the circuit entrance. By the time we had completed the five-minute walk to the media centre, I was already sweating. I was carrying my camera gear, but the extra pounds I’m currently dragging around with me didn’t help.

The guys in the accreditation centre were a little surprised we had been sent in this direction. Apparently, we could use a tunnel near the media centre to get to the other side.

There was still no sign of a shuttle so we decided to head back to where we started to find the tunnel. We found it easily enough, but when we came out the other side we couldn’t remember if they said to turn left or right. We decided to go left.

After walking most of the way down behind the main grandstands we realised we’d gone the wrong way. Nearly an hour after first leaving the media centre we finally found the welcome centre. I was hot, sweaty, and pissed off with walking in the heat. I walked into the welcome centre to find the f***ing ATM was out of service.

You can imagine my response. Although given the farce we had gone through getting there I wasn’t surprised. We did eventually manage to get some money. Upon hearing our story the O’Stig took pity on us and gave us a lift to the airport. From there we were able to catch a shuttle to the hotel. The moral of this story! Never go to a race track without any money.

Dealing with the heat on Friday and Saturday was tough but manageable as I focused on the MotoGP class. Only being out for an hour at a time, I was able to get back into the air-conditioned media centre to cool down.

Sunday, however, was one of the toughest experiences of the year. The Moto2 championship was a certainty to be won, and there was a possibility the Moto3 championship could be decided as well. I was going to have to cover each class which meant four hours out under the baking Sepang sun.

I left the cool of the media centre around 12.45pm and stepped out into the furnace. I had planned to shoot the Moto3 grid but the heat pushed me in the direction of the air-conditioned media shuttles.

After shooting the race I walked back for the podium and hung around for the Moto2 grid while trying to find some shelter from the sun.

From the grid, I spent a few laps at the final turn by which point I really needed to get out of the heat. There’s nowhere to shelter trackside, so I walked back to the paddock and hid around the garages until the end of the Moto2 race.

Between the end of Moto2 and the start of MotoGP, I was able to return to the media centre for 20 minutes to cool down and rehydrate. I found Stephen, and as I had decided not to shoot the MotoGP grid, I let him take my vest so he could.

It was around 4 pm when I was finally able to get out of the heat and cool down in the media centre. I was a hot sweaty mess but otherwise okay. One of the Czech photographers looked a lot worse than I did.