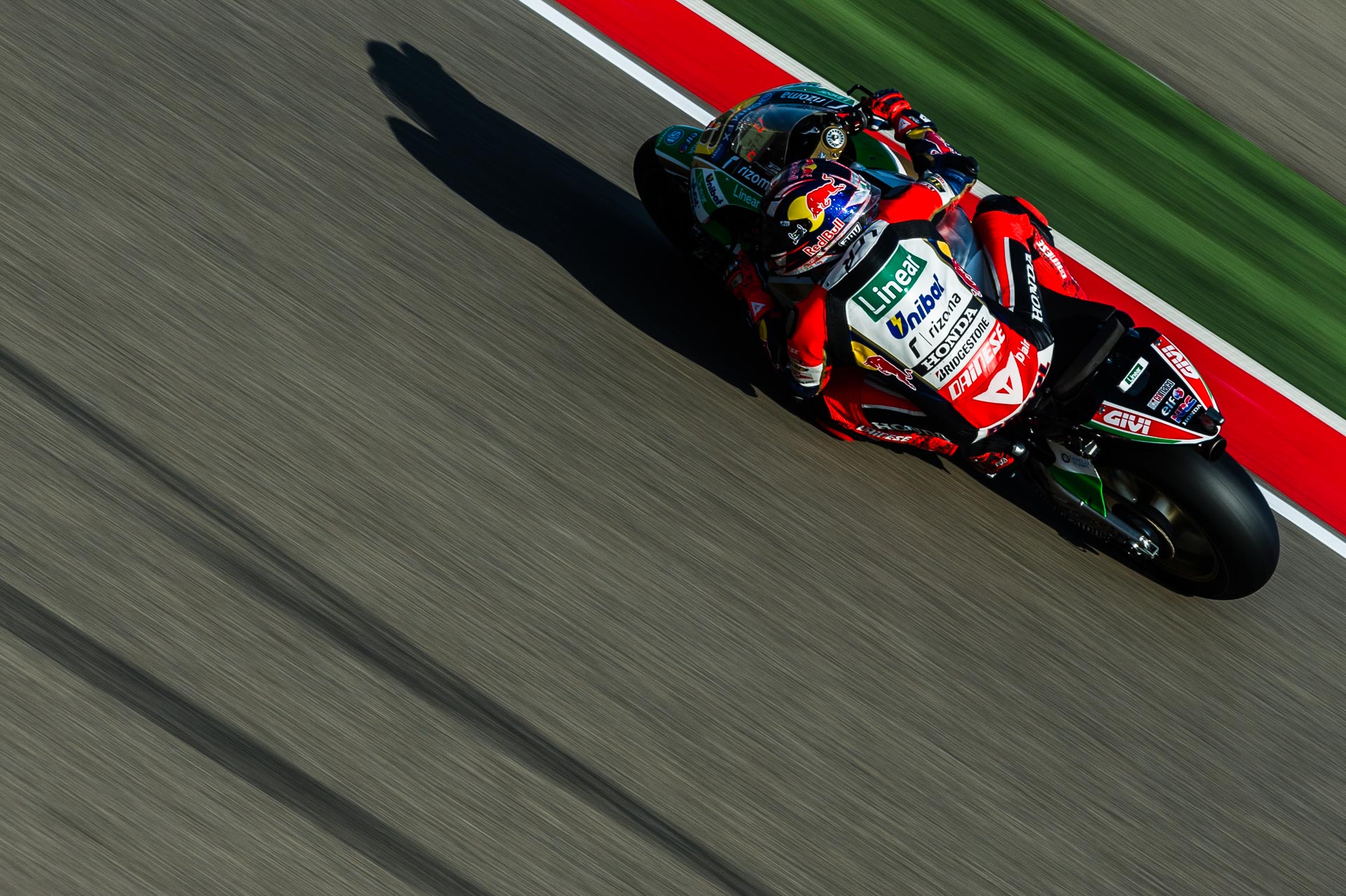 Before I begin I would like to apologise for my tardiness in bringing you the Aragon story.  When I arrived home from Aragon I went straight on holiday to Australia. I’m finally sitting down to write this from a bar in Gatwick Airport as I wait for my flight back to the Isle of Man following the Malaysian race. Apologies over, back to Aragon.

I’d been looking forward to the Aragon race for most of the year.  The track looked great and I’d been able to get a room in a house rented by MotoGP photographer Andrew Wheeler.  There were several other photographers and journalists staying there so it had the makings of an excellent weekend.

The circuit at Aragon is out in the middle of nowhere.  The closest and most convenient airport for me was Barcelona which was around two and a half hour drive away.

At the Silverstone round, a friend had mentioned that he would be able to give me a lift back to Barcelona on Monday if I was able to find a way to the track.  I contacted a photographer friend who I knew was also staying with Andrew.  He had already booked a car and was happy to give me a lift.

Before I go any further I would like to point out that my friend has a different view of driving on public roads to most people.  To him, the road is a race track.  Each corner should be attacked as though it was a qualifying lap at Monaco.  On the off chance that this story will be read by the Aragon plod (cops for our American readers), I have decided to keep his identity hidden.  For the rest of the story, he shall be known as The O’Stig.

I met up with The O’Stig on Thursday morning at Barcelona airport and we set off to pick up the hire car.  I don’t know why but picking up a hire car in Europe always takes an eternity.  After standing in the not particularly large queue for around an hour we finally had the keys to our Fiat Panda.

On the way to the Panda, The O’Stig revealed he had turned down an upgrade to a Smart car.  Not sure how a Smart car can ever be considered an upgrade, even from a Fiat Panda.

Despite the O’Stig’s best efforts the drive to the track was pretty uneventful and a good amount of time was shaved off the journey.  I was even able to take in the beauty of the surrounding area.

After setting up in the media centre I discovered the answer to a question I had been pondering since we arrived.  Why build a circuit out in the middle of nowhere? Around the media centre, there were old racing photographs of a street race on the Guadalope Circuit in the nearby town of Alcañiz.  Known as the Premio Ciudad de Alcañiz it ran from 1965 to 2003.  After losing the licence to race on the Guadalope Circuit an alternative was sort and Motorland Aragon was built. Motorsport is clearly in the blood of the people who live there.  Coming from the Isle of Man that is something I can relate to.

Our accommodation for the weekend was a house in the beautiful Spanish village of Beceite.  I’ve no idea how Andrew finds these places but I’m grateful for the invitation.  Having spent a lot of the season in hotels on my own it was nice having a group of people around to socialise with.

I travelled into the track on Friday and Saturday with The O’Stig in full race mode both days, pushing the little Panda to its limits on the tight twisty roads between Beceite and Alcañiz.  Before announcing our arrival into the circuit car park with a nice handbrake slide towards the parking space.  He did let himself down though as he had to straighten the car up.  A little more work needed on the handbrake turn into the parking space.

As I hadn’t been to the track before I tagged along with the O’Stig on Friday morning to get the lay of the land.  I’d heard comparisons to Laguna Seca before, mainly due to turn 8 with its mini corkscrew. I could see other similarities as well.  The surrounding hillside boor a striking resemblance to the hills around the California track.  The climate was very similar, with a cool start in the morning before it would warm up throughout the day.

I decided to give myself a break from The O’Stig on race day and travelled with my friend Stephen who had arrived on Saturday. When we arrived at the track visibility was virtually zero due to thick mist.  Another thing Aragon has in common with Laguna Seca. Sitting in the media centre we were concerned if anything would happen as it appeared to be getting worse.  Thankfully the mist started to lift and the organisers managed to stick to the schedule despite a delay to warm up.

After a busy day at the track, it was nice to unwind back at the house with those who hadn’t already started the journey home.  We had a laugh when Stephen received a text from The O’Stig who’d been stopped by the police for speeding.

If only they knew.